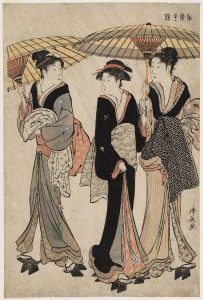 Three Women in the Rain, from the series Current Manners in Eastern Brocade (Fûzoku Azuma no nishiki)

Between 1956 and 1965 the Japan Post Co issued an 11-part series of 10 yen stamps celebrating famous ukiyo-e artists through some of their most recognizable woodblocks. Artists included Kitagawa Utamaro, Suzuki Harunobu, Chobunsai Eishi and others. While it is unknown who it was that modified these watches, it most likely was a watchmaker employed by one of the luxury department stores in Japan. They seem to have used the issued stamps to modify the dial of Seiki Lord-Matic watches between the years 1965 and 1973 and created these unique and eye-catching timepieces.

This watch dial/stamp is Three Women in the Rain, from the series Current Manners in Eastern Brocade by Torii Kiyonaga and published around 1783.