Ohara Koson – A Couple of Pheasants 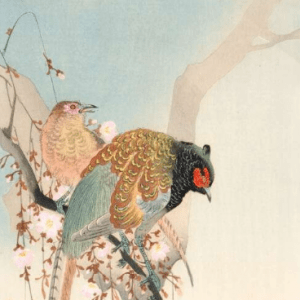 “Pheasants” by Ohara Koson, print at the British Museum.

An absolutely stunning early print (created around 1900 based on the British Museum’s acquisition date) by Ohara Koson, published by Daikokuya. A male and female pheasant are perched in what looks to be a cherry tree, among a small cluster of blossoms on a gnarled branch. Delicate bokashi shading of the sky, coupled with the treatment of the birds and branch, lends a watercolor painterly feel that is rarely seen or achieved.

Interesting to note is that there seem to be two different versions of this print, with the most noticeable detail being the beak of the female pheasant. You’ll notice in the picture to the right that the beak is open, whereas in this print the beak is closed. There are also small details, like the coloring of the eyes, but the different carving for the beak is intriguing.

This print measures 7.5″x13.75″ and is in excellent condition. Outstanding color, thin and intact margins, no discolorations at all, and a mostly clean verso with just a tiny bit of tape residue on the upper edge. “Made in Japan” stamped on the verso. Super fine details.

Ohara Koson (小原古邨, 1877-1945), who also went by the art names of Hoson and Shoson, began his career as the student of Suzuki Koson where he painted plants and animals between 1895-1902 gradually becoming known as a Nihonga painter (a term meaning traditional Japanese vs the increasingly popular Western style) in the Kacho-ga (nature print) genre. Briefly during the Russo-Japanese war Koson produced Senso-e (war prints), but the vast majority of his early prints (1900 -1912) were nature prints designed for the North American and European markets for the publishers Kokkeido and Daikokuya. These prints were all signed “Koson”. Between 1912-1926 Koson returned to painting, but using the name Shoson, he continued to design woodblock prints, this time in collaboration with S. Watanabe. Koson also produced prints using the name Hoson which were published by Kawaguchi between 1930-1931.

While the artists’ prints had always been sold abroad, Koson’s success was cemented as a result of the 1930 and 1936 Toledo Museum exhibitions. More prints by Koson were sold during these shows than any other artists’ due to their artistic merit and their relatively inexpensiveness in comparison with of the works of Yoshida, Shinsui, Hasui and others. Koson’s career peaked in the mid 1930’s. His work is realistic, based mainly on his own sketches and watercolors. It is estimated that he produced more than 450 designs of birds.