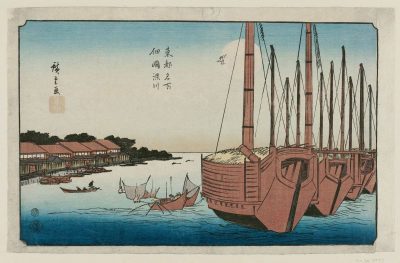 A Meiji-era reproduction in miniature of an Edo-era print by Hiroshige entitled “Tsukudajima and Fukagawa (Tsukudajima Fukagawa)“, from the series “Famous Places in the Eastern Capital” (Tôto meisho), this composition takes a crop from the original print and adds a more pronounced evening atmosphere to the piece.

The woodblock is in pristine condition with solid colors, registry, no fading or discoloration. Bleed through to the verso, intact margins, and no signs of tipping at the corners.

Born in Edo as Tokutaro Ando, Hiroshige grew up in a minor samurai family. His father belonged to the firefighting force assigned to Edo Castle. It is here that Hiroshige was given his first exposure to art: legend has it that a fellow fireman tutored him in the Kano school of painting, though Hiroshige’s first official teacher was Rinsai. Though Hiroshige tried to join Utagawa Toyokuni’s studio, he was turned away. In 1811, young Hiroshige entered an apprenticeship with the celebrated Utagawa Toyohiro. After only a year, he was bestowed with the artist name Hiroshige. He soon gave up his role in the fire department to focus entirely on painting and print design. During this time he studied painting, intrigued by the Shijo school. Hiroshige’s artistic genius went largely unnoticed until 1832.

In Hiroshige’s groundbreaking series of woodblock prints, The 53 Stations of the Tokaido (1832-1833), Hiroshige captured the journey along the Tokaido road, the highway connecting Edo to Kyoto, the imperial capital. With the Tokugawa Shogunate relaxing centuries of age-old restrictions on travel, urban populations embraced travel art and Hiroshige became one of the most prominent and successful ukiyo-e artists. He also produced kacho-e (bird-and-flower pictures) to enormous success. In 1858, at the age of 61, he passed away as a result of the Edo cholera epidemic.