A scenic winter walk through snowy Maruyama Park in Kyoto, the majestic weeping cherry trees covered in snow, a woman in brightly-attired clothing walking among the whites and blues of the snow and water.

Maruyama Park (円山公園, Maruyama kōen) is a park in Kyoto, Japan, noted as the main center for cherry blossom viewing in Kyoto, and nationally designated Place of Scenic Beauty. The park’s star attraction is a weeping cherry tree (shidarezakura) which becomes lit up at night. The main entrance to the park is through Yasaka Shrine, which sits at the eastern end of Shijō Street in the Gion District. Directly to the north (and abutting the park) is the vast temple of Chion-in, followed by the smaller temple of Shōren-in. 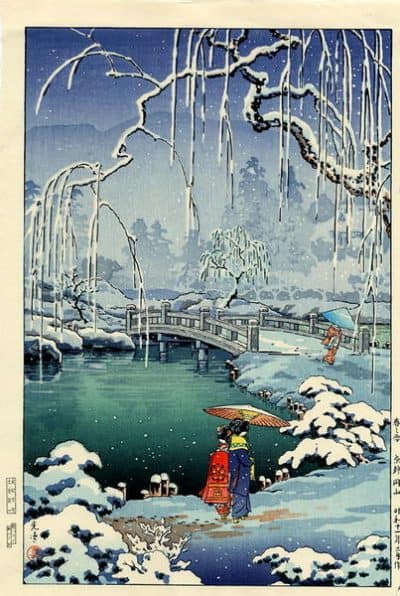 This piece is the smaller postcard-sized version created by the artist of his larger composition pictured here. In both versions Tsuchiya Koitsu makes incredible usage of the cool blues and whites of the snow and water, while utilizing the weeping cherry tree to frame the “subject” of the piece, the woman taking in the scene in the warm colors of her cloth and umbrella. While the larger version of the print has a more printerly-feel, the small postcard looks almost watercolor in its treatment and application.

This version of the print is a pre-war edition in good condition with solid bleed-through to the verso, strong lines and color, and no signs of fading. The print does not have any signs of being tipped to backing. There is light soiling in the lower area of the print which could likely be cleaned professionally if desired.

Tsuchiya Koitsu is a well-known artist of the Shin Hanga movement, but not among the trendy names like Hasui. As with many shin hanga artists, Tsuchiya Koitsu specialized in landscape images.

Born in 1879 in rural Japan with the given name Koichi. He became a student of the ukiyo-e master Kiyochika Kobayashi (1847-1915) after starting an apprenticeship for a woodblock carver who worked for Kobayashi. Soon the ukiyo-e master himself took care of the young Koitsu, where he stayed and worked for 19 years in the home of his master. From 1931 on, Tsuchiya Koitsu became one of the artists working for the publisher Watanabe in the shin hanga style. His style is reminiscent of the works of his master Kobayashi and of the famous shin hanga artists Kawase Hasui and Hiroshi Yoshida. In typical shin hanga style Tsuchiya Koitsu intensively used the effects of light to create moods and emotions in his images.