A flower seller hurries along through the rain. carrying two flats of flowers over his shoulder.

A flower seller hurries along through the rain. carrying two flats of flowers over his shoulder. 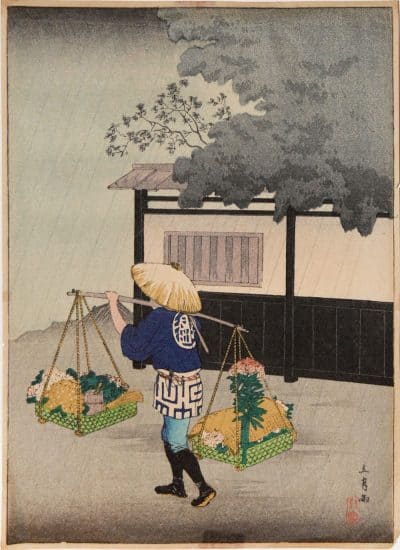 Chirimen-gami-e or chirimengami-e (“compressed thread paper prints”) were crinkled paper prints or “crepe/crepon” prints. Ukiyo-e crepe prints were produced at least as early as 1800 in Edo and were used on occasion for alternate states of some ukiyo-e designs. The compression technique resulted in a highly textured surface and noticeably smaller paper sizes, which offered a different aesthetic from the image printed in standard editions. A noticeable side effect of the technique is the retained richness and vibrancy of the colors. Despite the extra effort involved in making these prints, they were, it seems, more a novelty than an attempt at serious refinement of the printed image.

There was a revival of chirimen-gami-e production in the 1880s with the advent of crepe-paper books to satisfy a growing Western market. Best known are those published by the Hasegawa company; their chirimen-gami publications were especially popular for children’s books, as the crepe paper was somewhat resistant to tearing and thus had a better chance of surviving handling by children.

This woodblock print by Shotei is in very fine condition. The colors are very rich without any blemishes on the plate. Solid bleed-through of the ink into the verso. A tiny bit of residual paper in the top corners from where the print was likely tipped onto a folio or board for sale. Regarding the size, as mentioned this technique shrinks the image; whereas the normal image was most likely Chuban-sized (7×10″), the resulting print is approximately 6.5″x8.5″.

While having searched extensively, we’ve been unable to find other copies of this print in the chirimen-gami-e technique.

Born in Tokyo as Katsutaro Takahashi, Hiroaki (aka Shotei/ Komei) was in his mid-teens when he began to work in the design department of the Imperial Household Agency. He studied nihonga, or “Japanese-style painting” under his uncle Fuko Matsumoto, but also worked as an illustrator for periodicals and textbooks. Beginning in the early Taisho period, Hiroaki regularly collaborated with the prominent Shin Hanga publisher Shozaburo Watanabe. Hiroaki used a variety of signatures. Many of his large landscape and bijin-ga are signed “Hiroaki,” while ‘Shotei’ appears on other works. Hiroaki was a productive artist, completing around five hundred designs by the time he was fifty. Unfortunately, much of his work was destroyed by the fire that raged in the aftermath of the Great Kanto earthquake in 1923. Despite this tragedy, Hiroaki continued to work as a printmaker until his death in 1945.

After the earthquake Shotei created another 250 prints mostly depicting scenic Japanese landscapes in the shin hanga style he had helped to define. He continued to work for Watanabe, but also worked with the publishers Fusui Gabo and Shobido Tanaka, where he had more control over the finished print than was possible with Watanabe. Shotei used a variety of names, signatures and seals during his lifetime. From 1907 until 1922 he used the name Shotei, and after 1922 Hiroaki and Komei.