Depicts a beautiful silhouetted night scene on Ohashi Bridge, lantern-lit by the vendor and travelers on the bridge. In the distance there is the silhouette of a lone boat on the water, and a far off lantern-lit village skyline.

Shoda Koho was a Japanese artist associated with the shin-hanga (“New Prints”) art movement in Japan during the early 20th century. This movement was influenced by European Impressionism and its imagery focused on landscapes, women, and nature. In the 1920s, the publisher Hasegawa commissioned a small group of artists to create woodblock prints for a series entitled “Hasegawa’s Night Scenes”, of which there were a total of 21 prints by 6 artists. 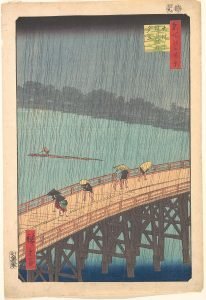 Sudden Shower over Shin-Ōhashi Bridge and Atake (Ōhashi Atake no yūdachi), from the series One Hundred Famous Views of Edo (Meisho Edo hyakkei) by Utagawa Hiroshige

This composition, entitled “Ohashi Bridge at Atako”, is one of the more “classical” compositions of the series, harkening back 70+ years to the works of Ukiyo-e artist Utagawa Hiroshige. While the Shin-hanga movement was influenced by European Impressionism, it can be said that market forces played a part here. Hiroshige’s work was well known and sought after in both the domestic market as well as the export market, so it’s possible that Hasegawa, in commissioning the pieces for the series, sought a balance of new and old styles.

The print for sale here is in what can only be described as original condition. It is in the original sale folio, tipped lightly at the top corners to the matting that it was sold in. The print itself is an early edition, as exemplified by its thin margins (but not trimmed) and its inclusion in the pencil-signed mat. Solid bleed-through of the printing, and rich colors without any fading, foxing, or other discoloration. This is remarkable in that it is in the original mat which, in our experience, has often led to minor acid damage to the prints or fading where the mat covered part of the image. Pictured also is the embossed watermark of the importer, Shima Print Company, who was known for purchasing entire runs of prints to be sold in the US market through their NYC and San Francisco stores.

Koho Shoda (ca. 1871-1946) was a Japanese artist associated with the shin-hanga (“New Prints”) art movement in Japan during the early 20th century. This movement was influenced by European Impressionism and its imagery focused on landscapes, women, and nature.