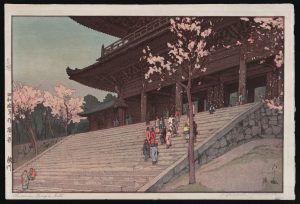 Among the most popular and sought-after artists of the early shin-hanga movement, Hiroshi Yoshida is unique in that his woodblock print work was exclusively printed by his own publishing company, Yoshida Studio, founded in 1925. This differs from artists such as Kawase Hasui, Tsychiya Koitsu, (early) Shiro Kasamatsu, Ito Shinsui and others whose work was published by Watanabe, Doi, Uchida, and others.

In regards to Hiroshi Yoshida’s woodblocks it is important to understand that there are different iterations of his work, each denoted by additional seals or lack of seals, and each can command a significantly different value as a result… so look carefully at the margins of a Hiroshi Yoshida print when you’re shopping!

It is assumed that Hiroshi Yoshida prints without a jizuri seal (or any other seals) are post-humous prints, but it’s possible that this isn’t entirely correct. Yoshida Studio was making printings of his prints while he was alive, printing from the original blocks, but that he himself wasn’t directly involved in the printing. These prints can still be old, just not printed by him.

Hiroshi Yoshida’s block signature
DON’T MISS OUT!
Subscribe To Our Newsletter
New subscribers receive a 10% off coupon. Be the first to get latest updates and exclusive content straight to your email inbox.
Give it a try, you can unsubscribe anytime.