When I started Moonlit Sea Prints I reflected upon my own journey in collecting Japanese woodblock prints, how I became a collector, and how to approach both purchasing prints for myself but also for other collectors. I wanted to stay within my own tastes, but also find and create opportunities for others to learn about the pieces and find avenues that captured their interest. What captures our imagination when we browse a gallery of prints, what makes us want to find more to add to our collection, and when we step back to look at our collection, is there a common thread (or multiple threads) that ties them together into something that says as much about the pieces as they say about us? 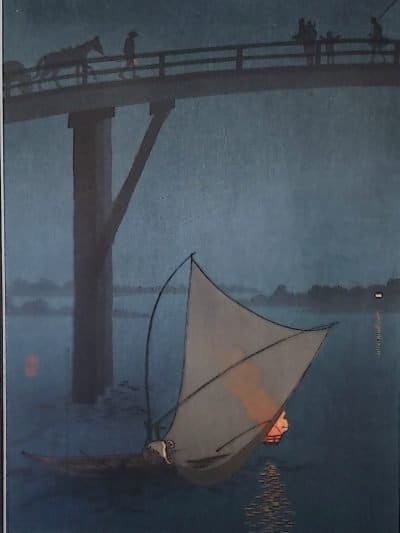 My first introduction to Japanese woodblocks was in a small store on the Upper East Side of Manhattan. Flipping through books of prints in plastic sheets, one piece jumped out at me: Arai Yoshimune‘s “A Fishing Boat“, which I later learned was part of a series called “Hasegawa’s Night Scenes“. The piece is from the early 1920’s, part of the Shin Hanga movement, and as a night scene has this mixture of stillness, mystery, and a touch of melancholy. It also spoke to me as I’m an avid fisherman.

With this purchase, and the way I’ve described it, it’s easy to see the different directions I could have taken in my early collecting. I first started by exploring the series it was a part of, “Hasegawa’s Night Scenes”. I then branched out, looking for other pieces by the artists within that series, nor just Arai Yoshimune, but and Eijiro Kobayashi and Shoda Koho, This then also led me to explore the greater Shin Hanga movement, learning about artists like Kawase Hasui, Tsuchiya Koitsu, Kobayashi Kiyochika, Hiroaki Takahashi Shotei, Hiroshige and more.

Learning from my own collecting development, I think there are many ways to grow a Japanese woodblock collection, each providing unique and varied ways of tying them together into a greater theme, but below I have taken a turn at ways that might interest you, all starting with that first piece that captures your imagination.

You’ve fallen for your first Japanese woodblock print, captivated by something about it. Was it a large, vibrant Kawase Hasui, or perhaps a Yoshimoto Gesso print of a bird? You’ve found your first, the most obvious path is to find another by this artist to see if they have others that you’re similarly attracted to. Chances are that if you’ve found one you’ve loved, you’re going to find others by the same artist. And if you’ve happened to gravitate to an artist like Shotei, his catalog is over 400 pieces, so you’ll be collecting for a long, long time!

By Style or Treatment

Within the medium there are many styles and treatments that are easy to gravitate towards or away from. You might enjoy scenes with lots of bokashi shading, or instead prefer prints that are flatter in nature with intricate patterning, or lots of empty space with simple line treatments. Even within the drawing of figures and portraiture there can be wide variations in how subjects are handled, with specific styling attracting you. For example, I’m not a big fan of Hiroshige’s portraiture, but I really find the figures of Tsukioka Yoshitoshi, especially from his series “One Hundred Aspects of the Moon“, captivating.

Something I love about Japanese woodblocks is that they are often part of a larger series, either by the artist or a collection of artists. Hiroshige was a master of this, creating series like The Fifty-Three Stations of the Tokaido Road, Thirty-Six Views of Mount Fuji, One Hundred Famous Views of Edo, and others, but then more “modern” artists participated in series like Hasegawa’s Night Scenes or ‘ Japanese Scenes on “Tanzaku”‘ by Gesso and Koho (pictured above). There is something exhilarating and gratifying about searching for and collecting entire series, piecing them together 100+ years after they were originally published and disseminated around the world. 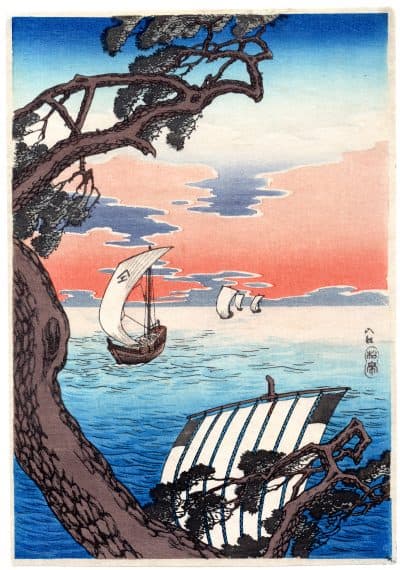 By Topic or Subject

Subjects are fun to collect around, especially if you don’t mind a collection that runs the gamut in terms of style. Using boats as an example, you can explore the varied treatment in nautical subjects by looking at Tsuchiya Koitsu “Sunset at Tomonotsu, Inland Sea” and comparing it to Arai Yoshimune’s “Kominato Bay” or Hiroaki Takahashi Shotei’s “Coming Ships“. You can have your favorites, but also appreciate how each artist approached the subject within their own style and composition.

You might tend to want to stay within a certain movement or time period within Japanese art and culture, finding the subjects, styles, and artists within that period to be your favorite. Some people strongly prefer the works Edo-period masters Utagawa Kunisada I, Hokusai and Hiroshige, others the masters of the Shin Hanga movement such as Kawase Hasui, Yoshida Hiroshi, Tsuchiya Koitsu, Ohara Koson and Elizabeth Keith. This leaves you open to pick and choose from a wide variety of subjects, treatments, series and more.

Many ukiyo-e prints tell a story or capture a specific scene, whether that is a fairy-tale, a famous battle or scene, or even more commercial in that they were sometimes portraits of famous actors in plays. One particular piece of history might capture your imagination, and then collecting the pieces that portray that moment give color and depth to that moment.

At the same time, you might enjoy the historical significance of a specific piece for what it itself represents. One of my favorite pieces is Eijiro Kobayashi’s “Night Bridge” which is part of Hasegawa’s Night Scenes. This piece was labelled as by “Whistler” in the catalog, mainly as it’s a re-interpretation of Whistler’s “Nocturne: Blue and Gold – Old Battersea Bridge“, but it could also be said that Whistler “borrowed” from Japanese woodblocks that he was seeing (and were all the rage in Europe), specifically Utagawa Hiroshige “Kyōbashi Bridge and Takegashi Wharf“, from the series ‘Meisho Edo Hyakkei’ (‘100 Famous Places in Edo’). This back and forth of influence is immensely interesting to me.

There’s never a wrong way to build a collection, but it’s important to research each piece as best you can, determining the condition, edition (early, late, re-issue, etc.) etc before purchasing, and then framing the piece (or storing it) in a way that protects the integrity of the paper, color, and markers of authenticity.

Shop our Store
Go to Top